KANSAS CITY, MO – January 14, 2015 – Ten technology startups will qualify for a total of $500,000 in grants, free office space and mentorship as part of the new LaunchKC business competition sponsored by the Downtown Council of Kansas City.

The application process begins March 31 and runs through June 30. The top 20 finalists will attend the first annual Techweek Kansas City conference on September 14-20, where a panel of entrepreneurs and venture capitalists will select 10 winners.  Techweek is the nation’s leading technology conference showcasing and enabling innovation ecosystems and recently announced the addition of Kansas City to its roster.

The 10 top-scoring entrepreneurs will be supported by LaunchKC’s coaching, mentoring and funding programs to help with the development of high growth, successful businesses in the Kansas City area.

“LaunchKC’s objective is to create a more robust startup culture and infrastructure in Kansas City,” said Bill Dietrich, president & CEO of the Downtown Council and chief administrative officer of LaunchKC. “This will strengthen our growing Innovation District in Downtown, where investors, inventors and entrepreneurs collaborate within a livable, walkable and transit-connected urban center.”

Entrepreneurs will be drawn to the competition by:

“There is a palpable sense of opportunity in Kansas City, and it is in a prime position to highlight its rapid growth and support of its technology community,” said Iain Shovlin, chairman of Techweek. “Now is the right time to partner with key supporters of technology in Kansas City to spotlight its unique environment which has fostered innovation and entrepreneurship.”

The LaunchKC.org website will serve as the gateway for the application process. Applicants will be able to apply online through I-Start and SharePoint software that has been donated and modified for LaunchKC by the Kauffman Foundation and Sprint.

LaunchKC is an initiative of the Downtown Council of Kansas City d/b/a Downtown Kansas City Civic Ventures, a 501(c)3 nonprofit corporation. LaunchKC is an economic development initiative of the Downtown Council, working in partnership with the Economic Development Corporation of Kansas City. It stems from Mayor Sly James’ bi-state innovation initiative that was established two years ago. The new effort is funded initially by a $250,000 grant from the Missouri Technology Corp. (MTC), and matched by another $250,000-plus from corporate, public and philanthropic supporters. www.launchkc.org @godowntownkc

Home to 2.5 million people, the Kansas City region offers the benefits of more than 50 unique communities and 18 counties in Kansas and Missouri.  As “America’s Creative Crossroads,” the region’s distinctive qualities come from a confluence of artistry and technology innovation.  Google selected the Kansas City metro for the roll-out of its Google Fiber service, which provides internet speeds at up to one gigabit per second. Cisco Systems has announced that Kansas City will become its next “Smart City” – transforming its downtown into a lab of connectivity through Wi-Fi and telecom sensors. www.thinkKC.com

Techweek is a seven-day technology conference and festival that celebrates and enables innovation ecosystems in six cities across the country:  Chicago, Detroit, New York, Los Angeles, Miami and now, Kansas City.  With Techweek as a conduit, a spotlight is able to shine on each individual technology community, providing entrepreneurs, innovators, influencers and visionaries to share ideas, sparking game-changing conversations and inspiring action. 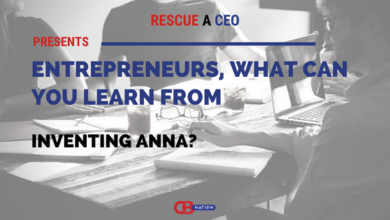 30 Entrepreneurs Share What They Have Learnt from Inventing Anna